What do you want to be when you grow up? Naturally being born and bred in the desert and living roughly equidistant from every Australian coastline I was obsessed with the ocean. A marine biologist!

Almost every winter and summer holiday when my brother and I were kids Dad Tetrised the back of the Hilux, then later the Defender, and we’d drive three days to the sea. To Perth, to Broome, to Maryborough, to Cairns. I loved nothing more than beach walks, scouring the sand for shells and fascinating flotsam and jetsam. Crab claws, sea dollars, coral. Two sea dragons – one leafy, one weedy – were my most prized possessions. I blew all my pocket money at the House of 10,000 Shells in Cairns. I poured over my heavy hardback Encyclopaedia of Shells and recorded the scientific name, distribution and rarity of my more impressive specimens, which perched on little stands atop shelves Dad constructed especially. My favourite is Epitonium scalare.

One year I entered my collection in the Alice Springs Show. Dad cut a huge scallop shell from wood for the display base and we covered it in wave-patterned fabric. First prize. What do you want to be? changed to A conchologist! for a while. Sometimes I’d place abalone, cones, cockles and cowries on the bottom of our pool and snorkel for hours imagining a radiant reef and fish of impossible colour below. Mum taught me to swim before I could walk. I have her to thank for feeling at home in the water.

Epitonium scalare, common name precious wentletrap, is found in the Red Sea, the Indian Ocean along Madagascar and South Africa, the South West Pacific Ocean and along Fiji Islands and Japan. The raised ribs are known as costae (as Mum would say, good Scrabble word). Source: Wikipedia

I hoarded dolphin everything; pendants and posters, glow in the dark stickers, figurines, mobiles, soft toys. When I was 9, at Monkey Mia, 900ks north of Perth, Western Australia, where wild bottlenose dolphins (Tursiops truncatus) have been swimming close to shore to be fed by rangers for over 50 years, I had an unforgettable encounter. Standing knee deep, transfixed, I ached for one to swim near. They approached other wide-eyed watchers then turned tail, and as the seconds ticked away my heart sank into the sand. None were swimming close and we’d been instructed to stand still. After 15 minutes of graceful gliding, gently accepting fish from the rangers’ outstretched hands, the small pod headed home. I was heartbroken. Then something magical happened. The oldest dolphin Nicky (she had a small nick in her dorsal) swam straight towards me, through my legs then back into the blue. 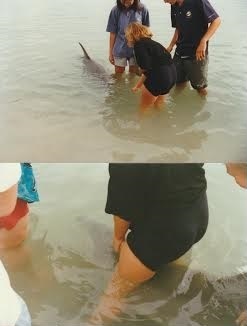 In 2000 my ocean girl dreams came true. On a one-day cruise in the Great Barrier Reef with Dad and my brother Hugh I dived at Michaelmas Cay. It was, in my 12-year-old’s words, the best thing I’ve done in my life. 14 years later I completed my Open Water Diver certification with Big Fish Diving, based on the small island of Nusa Lembongan off Bali’s southeast coast. The magical memory of Nicky swimming through my legs made me smile even wider when a large pod of dolphins was spotted as we approached Manta Bay, my first dive site. Ten minutes in a manta sailed right over me. I rolled onto my back and my eyes bulged into my mask as it blocked out the sun. Manta Eclipse. 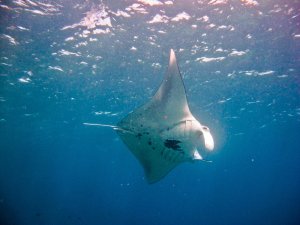 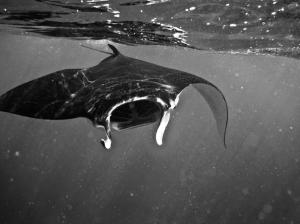 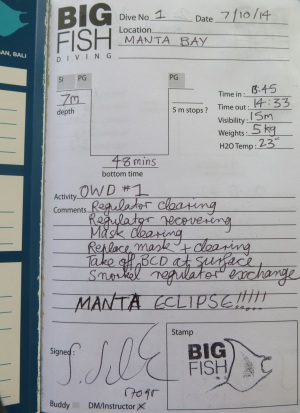 Early the day after I became certified, rather than walk the short distance from our bungalow to Big Fish to gather our gear (fins, mask, boots, BC, regulator, check) Chriswan and I rattled on a rented scooter over the bright yellow suspension bridge to Nusa Ceningan and jolted and jerked up the mountain. Though the road was more potholes than asphalt, a woman weaving young coconut leaves into small square baskets for offerings who gave us directions minutes before insisted, “jalannya bagus!” I shrieked and squealed as we lurched and reeled but we wanted a silent sea view. It was Nyepi Laut, Day of the Silent Sea, when all marine activities in the Klungkung region are stopped to pay respect to Dewa Baruna, god of the seas and oceans. Nyepi Laut has been observed on Nusa Lembongan, Nusa Ceningan and Nusa Penida since 1600. The teeth-clenching ride was worth it.

I loved every second of learning to dive, at sea and on land. Every aspect of Big Fish Diving was exceptionally professional; my tall, tattooed German instructor Stefan Schlenk’s guidance was clear, precise and supportive, the facilities, dive gear and boat meticulously maintained. Each trip comprised two dives at different sites determined on the day by weather conditions and divers’ abilities and preferences. Between each dive we ploughed into a brown paper parcel of nasi campur – white rice with chicken, green beans and carrot, a little perkedel jagung (corn fritter) and serundeng kelapa (spiced shredded coconut). Washed down with a plastic cup of sinfully sweet 3-in-1 kopi (coffee, creamer, sugar which I’d never go near on land), it was enak banget. Just like everything tastes better when you’re camping, everything tastes better after diving.

After four instructional dives with Stef and two other students I was ready to dive with Chriswan as my buddy. He’s a Dive Master with over 700 dives under his weight belt. Stef remarked how fortunate I was to have Chriswan as my buddy, as he’s not only completely competent but “has the eyes as well”. As he drifted effortlessly he pointed out tiny creatures to me – a translucent anemone crab, a long whiskered banded coral shrimp and my all-time faves, nudibranchs! I’ve long been enchanted by their spectacular colours and stunning shapes. I once went to a costume party in Canberra dressed as my absolute favourite, the Spanish dancer (Hexabranchus sanguineus). 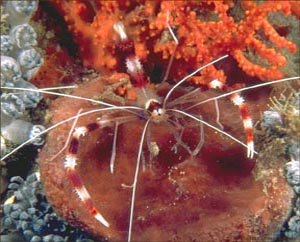 Chriswan encouraged me to peer under coral bombies, which are standalone structures rising up from the reef. I was chuffed to discover on our final dive a magnificent black and white speckled star puffer lurking in the gloom, and glimpse a lionfish’s long fin fronds protruding from a crevice. There are hand signals for more prevalent species – for the lionfish the fingers of both hands are interlocked and waved up and down. I was thrilled to make this motion for Chriswan; my first fish sign. Apart from the majestic mantas, a giant smiling turtle merrily munching on staghorn coral and three delightful nudibranchs, my marine life highlight was a curious-looking crustacean skitting along the reef which I alerted Chriswan to before it darted beneath a rock. “Mantis shrimp!” he told me soon after we surfaced. The wonders of the reef are infinite.

Lionfish in the dark

Throughout our time on Lembongan, whether gazing enraptured at the reef or breathing in deep the heady scent of salt and seaweed, I often smiled at mental images of little me. Reading every book on whales I could find, perfecting my dolphin drawing, counting down the days till our camping holidays on Quandong Beach, lying on my tropical fish bedspread staring up at my slowly spinning mobiles, fantasising about diving.

I’m hooked. Whenever I plan to travel somewhere the first question will always be, But can we dive there? To quote everyone’s favourite Jamaican crustacean, “Darling it’s better, down where it’s wetter, take it from me.” The little Julz in me is so happy. 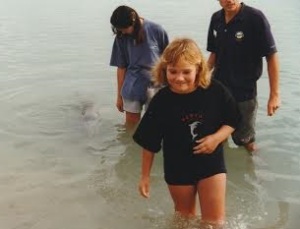 All underwater photography by Chriswan Sungkono unless otherwise stated. Thanks buddy!

Shortly after I published this post I received an email from Dad:

Just one point: the dolphin swam toward you and went past but then did a U turn and swam back through your legs from behind. That was the most spectacular thing as you thought it had gone by you and you thought you had missed out altogether – but, then it came back!

I know I don’t believe in such things: but at the time I thought, and continue to think – because it is a nice thought – “I wonder if that was Pingy, coming to say goodbye”.

[Pingy is what my brother and I called my mum’s mum. At the time of the dolphin encounter we were living in Perth, to be close to Pingy who was dying from bowel cancer. Dad had taken Hugh and I to Monkey Mia to give Mum a little relief.]

After the dolphin touch I phoned Meredith and she told me that Pingy had died a short time before I phoned.

← Ramadan Lite
So much more than nasgor! →