Wonders of the Lembeh Strait, Splendours of the Sulawesi Sea 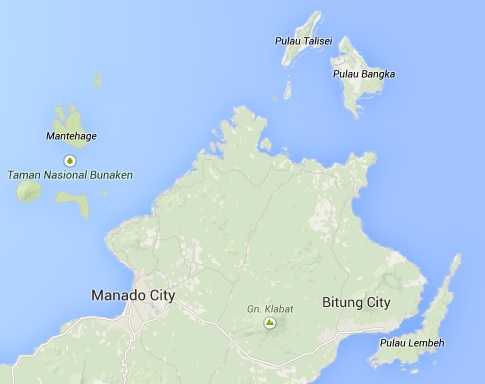 After a few delicious days devouring perkedel nike in Manado, Chriswan and I folded ourselves into the front seat of a battered old bus bound for the small port city of Bitung, where we hopped on a speed boat sent to meet us by Two Fish Divers of Lembeh, an island on the northeast tip of the top right arm of Sulawesi. (I think of Sulawesi as a ‘K’, and will refer to its arms throughout my Sulawesi scribblings). It was a wind-whipping five-minute skim across the Lembeh Strait which is world renowned for muck diving. Muck diving doesn’t sound all that pleasant, does it? As opposed to the usual divers’ eternal quest for exceptional visibility, the ability to see more than ten metres or so when muck diving is rare. You’re swimming slowly (currents are rare in the Strait) over rippled black sand, gravelly coral skeletons or murky sediment. Why choose these shadowy realms over dazzling, pristine coral reef? Because the creatures who lurk in the muck are weird and wonderful and often only found in these mucky environments.

Lembeh is also known as a top spot for spying octopus; the mimic octopus, the wunderpus (yes, the wunderpus!) and the coconut octopus. With its extremely long tentacles the mimic forms the shape and adopts the colour of poisonous creatures such as lionfish and jellyfish, or camouflaged flat fish such as flounder, or even small sea worms and sponges to elude predators. From Wiki: “it also uses aggressive mimicry to approach wary prey, for example mimicking a crab as an apparent mate, only to devour its deceived suitor.” What a cunning cephalopod! Meanwhile the wunderpus’ scientific name, Wunderpus photogenicus, says it all really.

Chriswan snapped a wunderpus in the Gilis.

We didn’t encounter the mimic or the wunder but we did have a grand time observing a coconut octopus who’d made a happy home in a pint glass. Pint o’ ‘pus please! The coconut octopus acquired the name from its unusual behavior of collecting coconut half-shells to create a hiding place. The pint glass served as a supreme fortress for our friend, and he’d even found a large bivalve shell for a lid! 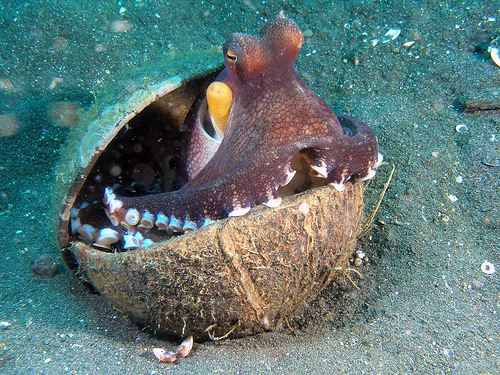 Seconds after I splashed in backwards for my third dive I drifted over a couple of sea urchin that appeared to have a red, blue and white neon light display in their centre. Well, dear readers, didn’t Wiki have some titillating facts about this flamboyant critter! The star urchin’s scientific name is Astropyga radiata. ‘Astropyga’ comes from the Greek ‘astro’ meaning star, while ‘pyga’ means anus. “Hence, it is named because of its star-shaped anus (or more precisely the star-shaped pattern around its anus). “Radiata” comes from Latin and means ‘radiant’, because of its colors and spines.” The radiant star anus urchin was definitely one of my favourite discoveries, as was the walking feather star, or comatulida, an otherworldly creature with long, feathery arms trundling along the seabed. From Wiki: “Most comatulids originally have ten arms […]. The arms are fragile, and if one is broken off, at least two grow in its place; in this way the number of arms can increase.” 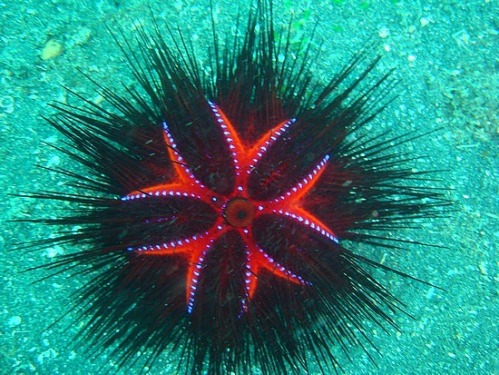 Here is a terrific Lembeh muck diving article and gallery.

After Lembeh Chriswan jetted off to Jakarta for a week of meetings while I took the public boat from Manado to the small boomerang-shaped island of Bunaken, on the northern tip of the top right arm of Sulawesi. The wooden boat was stacked with masses of market produce, gallons of drinking water and cooking oil, boxes of Bintang. A scooter was carried aboard and secured with rope. Above the swollen baskets of spring onions and giant hands of bananas, bulging bags of KFC were hung from hooks on the ceiling. I was thankful the durian was stashed in a cupboard. There were mostly women on board returning from their market run, chatting loudly above the twin outboard motor thrum. I spoke with a charming ibu named Mariana who lives in Kampung Kristen. On Bunaken Christians and Muslims reside in separate villages though there’s no enmity between them; the separation is simply convenient and means the wiry black long-snouted pigs snuffling around Kampung Kristen won’t roam into any Islamic homes. 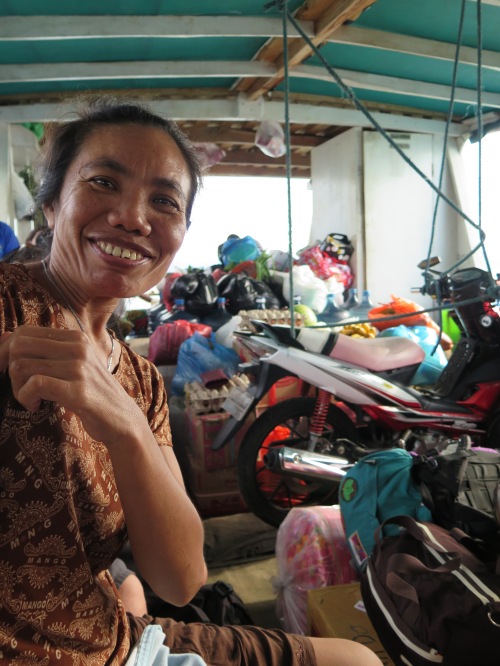 The homestay I’d booked, Daniel’s Homestay, had a small dive boat waiting at the beach where the public boat pulled in. There was another bule on the public boat who’d booked Daniel’s too, and upon arrival we were shown to neighbouring bungalows on the beachfront. Lars, from Norway, turned out to be a superb neighbour, and Daniel’s Homestay swiftly felt like home. In all my travels I’ve never stopped in the one place for so long; it’s always been three to four days here, four to five days there. Never had I spent nine days on a spectacular reef-fringed island.

Like most dive resorts on Bunaken three meals a day were provided at Daniel’s and our dinners turned into long, enthralling diving story swaps, superb underwater photography slideshows and marine creature identification sessions. We had an excellent crew. Lars, ever humble yet teeming with incredible aqua anecdotes, Robert and Karen, a charming Canadian couple who live on a houseboat, Monash Honours ecology graduate Ruby and Monash biology/geography student Andrej, a gentle giant Brit named Orran who triggered a laugh a minute and myself. I learnt vast amounts about extraordinary seascapes and marine life from all over the world from the veteran divers, and with the blessing of Ruby and Andrej’s boundless and infectious ecological enthusiasm and encyclopedic knowledge I now look at every creature and its ecosystem with intensified curiosity. 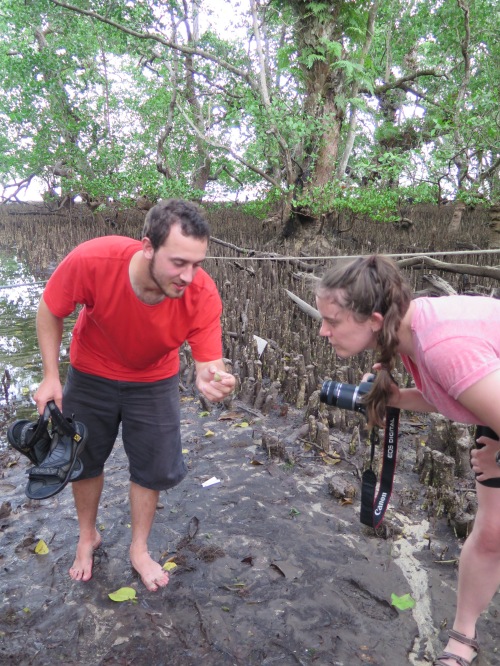 Andrej and Ruby examine a hermit crab. Love and miss you guys!

Just off Daniel’s beach is a spectacular fringing reef swarming with hundreds of flamboyant fish species and vibrant, healthy coral that drops off into a wall. Beyond is deep blue dancing with the rays of the sun. On my second day in Bunaken, while Andrej completed his Open Water course, Ruby and I snorkeled for two glorious hours, constantly captivated by the phenomenal variety and vibrancy of the fish, in awe of the green turtle flying in slow motion. In the Bunaken National Marine Park, more than 70% of all the known fish species of the Indo-Western Pacific can be found.

After an hour or so dark, low clouds rolled in and we were pelted with cool drumming drops. Diving down then gazing up at the pummeled crystal surface, the vivid reef at the top of my vision, was one of the most surreal sights of my life. As we were returning to shore I spotted a long, black and white sea snake gliding gracefully through small crevices in the coral. Ruby and I hovered over it for a few minutes, enchanted by its perilous beauty. The banded sea krait is one of the most venomous snakes in the world but, according to Rubes and Andrej, its mouth is so small it’s unable to bite any areas of the human body bar the webbing between our fingers and toes. Over lunch Ruby and I leafed through Daniel’s spineless, coverless copy of Reef Fish Identification: Tropical Pacific, identifying the more unusual species we saw. We listed 28, but there would’ve been plenty more. 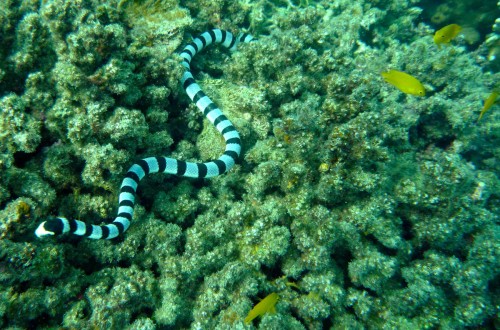 The next day Ruby and I went out with the dive boat for a snorkel. On the way to the second dive site one of the crew spotted dolphins in the distance. We changed course, steered towards them and soon dorsal fins were slicing the surface all around the boat, and then suddenly they were there, riding the bow wave. Huge, powerful spinner dolphins spiraling and leaping. We shrieked and cheered and snapped away. Considering they were breaching in a circumference of about 400 metres Bob estimated it was a pod of at least 100. 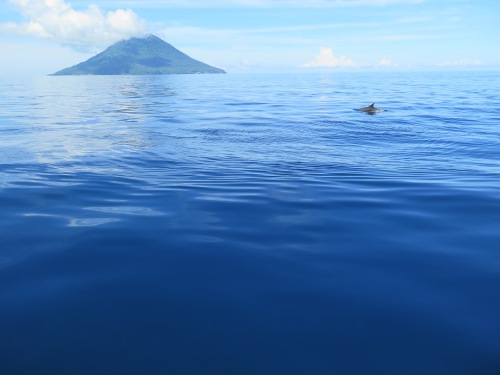 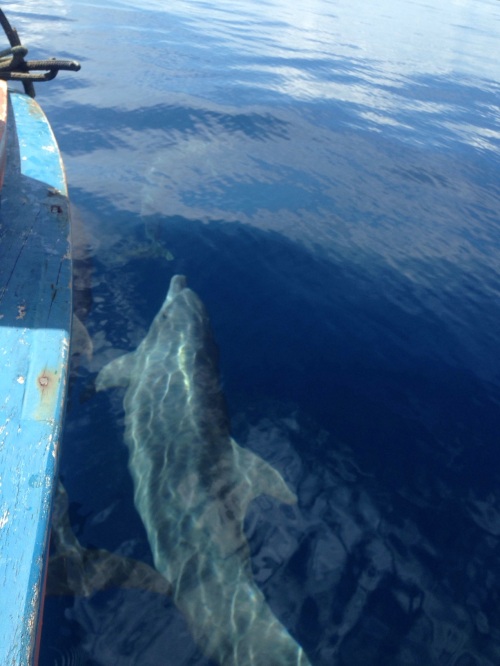 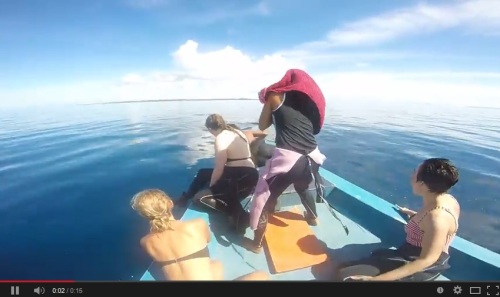 Click the image for the Lovely Lars’ GoPro vid of us shrieking and cheering.

We frantically grabbed our snorkel gear and splashed in desperately hoping for an underwater glimpse, but as dolphins normally do they scattered instantly. What we saw then scared the hell out of us: a three metre sailfish, tall black jagged sail fully unfurled and long silver sword pointing straight at Ruby! She immediately put her fins up in defense. I thought she was going to become Ruby satay! We must have jumped in directly in front of it. Startled, it swam left then right for a few seconds then in a silver flash disappeared into the blue. With racing hearts we trod water for a few minutes, completely flabbergasted at what we’d just seen. 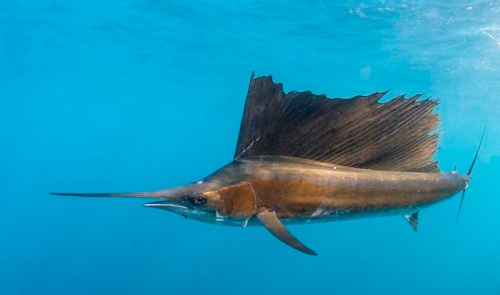 After a sun-drenched morning of snorkeling on the house reef or heading out with the dive boat, and then a long read and a siesta in a hammock swinging by the mangroves, we’d walk through the immaculate Kampung Kristen (ever on the lookout for Sulawesi beasties) to the southernmost tip of the island for a spectacular sunset. One eve I delighted in chatting with a primary school teacher and his two young children splashing in the shallows. They were from Papua and had traveled four days by boat to Bunaken. 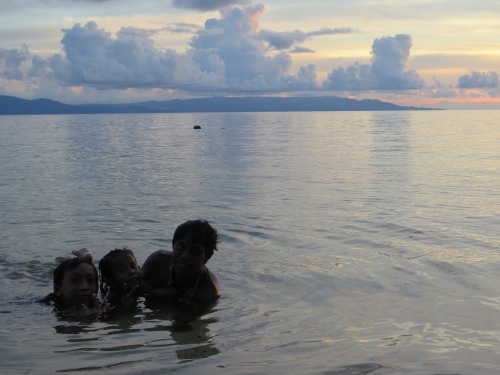 They loved Bunaken just as much as I. 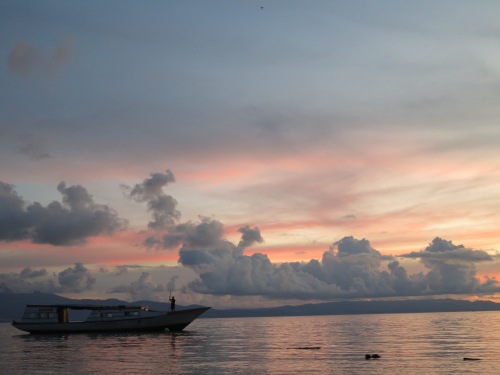 The public boat I traveled to Bunaken in. 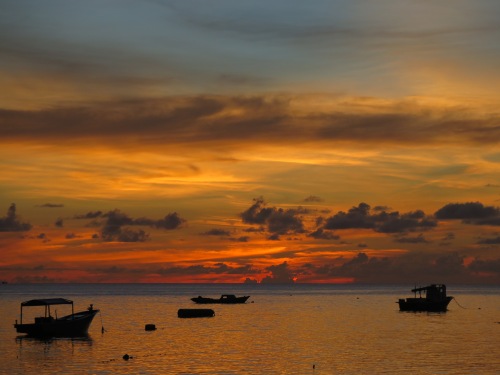 Sulawesi beasties abounded, and what fun it was to admire and examine them with my dear new ecologist friends!

On my second last day I swapped the snorkel for a regulator and the rash vest for a wetsuit and discovered a new favourite creature, the garden eel. Small, slender, smiling white eels speckled with black dots popped up out of the sandy bottom to say hello, then ducked back down when one drifted too close. They were devastatingly cute. On my dive was a German scuba fiend, Jan Rhensius,who never dives without his top notch camera gear. Vielen dank for your fantastisch photos Jan! 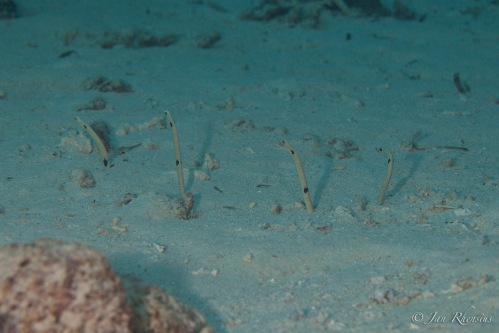 The ridiculously cute garden eels popping up to say hello. 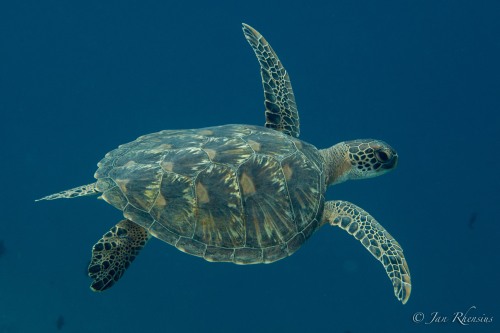 We saw turtles almost every day in Bunaken. Their grace and ancient aura will always entrance me. 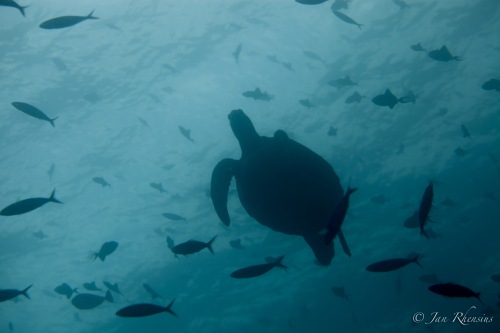 The clown fish has been internationally renamed ‘Nemo’, but every time I hear someone gush about Nemos I chuckle about the Darwin fish and chip shop, Frying Nemo. 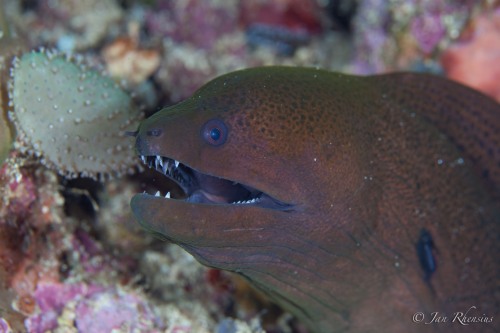 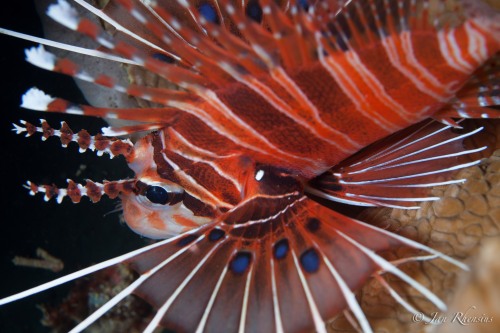 The first underwater fish sign I ever was for lionfish. 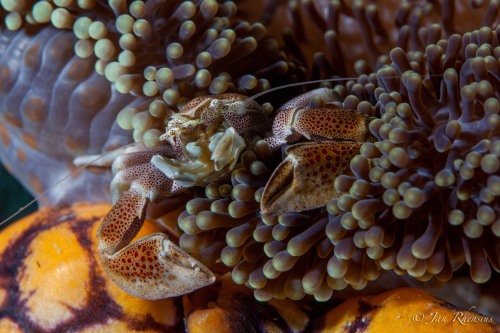 A rather majestic anemone crab. It takes a sharp eye to spot crustaceans, but it certainly helps knowing where they live! 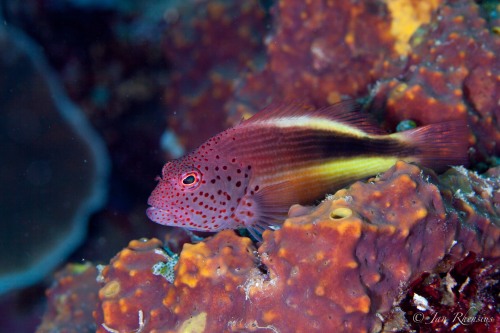 The freckled hawfish became my second favourite fishy of Bunaken. I love the way they stand sentinel on coral, surveying the scene. 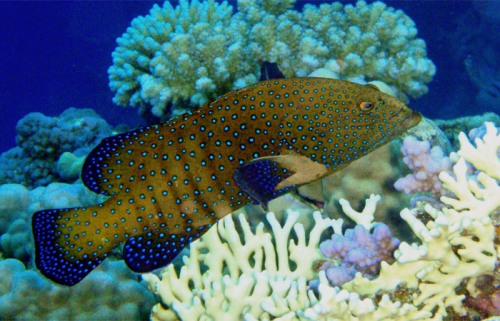 Early one morning we set out in search of dugongs as they’d been seen in the area sporadically. No dugongs but Ruby spied a pair of small silvery cuttlefish that flashed brilliant orange as they sped off, Andrej found a dappled red and yellow scorpion fish, the exact same colour as the coral it was perched upon and lucky Lars had a close encounter with a white tip reef shark – I knew it must have been a shark for his alarmingly loud WOAH blasted into his snorkel. On their final afternoon Ruby and Andrej, Lars and I paddled gingerly through a precariously low tide for a late afternoon snorkel. We had a much more intimate view of the reef; I admired tiny urchins concealed in crannies, perfect circles of baby staghorn coral, electric blue antheas and minute black anemone fish. And then, “Guys! Guys! I think I’ve found a walking feather star!” It wasn’t as big as the one I’d seen in Lembeh but it was just as mesmerising. Soon after on the wall we drifted along with a green turtle Lars alerted us to. As we waded back in we thanked each other for our finds. 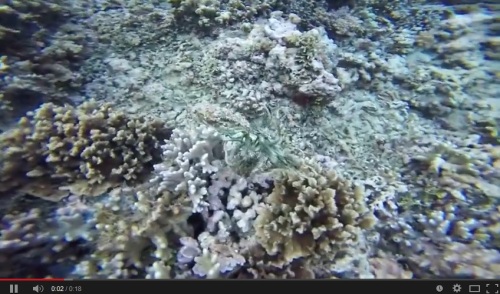 Click the image for Lars’ vid of the feather star. Incredible creature.