After my first solo international jaunt in Vietnam in December ’09, I met my former boyfriend Nicholas Combe in Bali for Christmas. It was my first trip to Indonesia. Nick and I overnighted in Padang Bai before fast boating to Gili Air, one of the three Gili islands lying like a trio of thought bubbles on Lombok’s northwest coast. In Padang Bai I admired a procession of people holding saffron umbrellas – men resplendent in white shirts and batik, women in white kebaya and iridescent ikat – wending their way up the beach. A wedding, I assumed. A cremation ceremony, Nick corrected me.

Never in my life had I thought about going to Bali. To Indonesia, but never Bali. Bali was where bogans thronged to in drunken droves for cheap beer, tattoos and garish knock off garb – like countless Australians my predominant image of Bali was clusterfuck Kuta. As summer approached when discussing my travel plans I would say I was flying from Saigon to Denpasar, then going straight to Gili Air. That sunny memory of Padang Bai and how it shattered my narrow misconceived notions of Bali still burns bright.

I’ve been living in Bali for almost two months in Kesiman in Denpasar’s east, on a gang (alley) off Jalan Sedap Malam, which translates to Delicious Night – the Indonesian name for the tuberose, a night-bloomer native to Mexico. My gang is Tunjung Biru, a small violet water lily. All the gang off Sedap Malam are named after flowers; the area is home to hundreds of plant nurseries and orchid shops. When my ojek (motorbike taxi) turns off the traffic-heavy main road onto Sedap Malam the temperature drops a few degrees instantly, which always induces a deep sigh of delectation.

It is 20 minutes’ swift stride from my little apartment to Sanur Beach where, in 1906, a large contingent of Dutch troops landed then marched to Kesiman where the local King had been killed by his priest for refusing to mount a resistance, and then to Denpasar palace. There they were met by the Raja and his retinue in white cremation ceremony costume. When the Dutch troops approached, rather than surrender a priest plunged a keris into the Raja’s chest while the rest stabbed themselves and others in the traditional Balinese mass suicide ritual of puputan. (Known as the Badung Puputan, it’s commemorated as one of Indonesia’s struggles for self-determination.) The Dutch razed Denpasar palace then pushed on to the kingdom of Tabanan where the King and his son surrendered and were imprisoned; two days later they suicided and their palace was also razed. It was this Dutch military intervention of 1906, and another in Klungkung in 1908 that also triggered puputan, which ended Indigenous rule in Bali.

Remarkably, however, it was also the catalyst for Bali’s tourism industry. History is a fickle thing. As horrific reports and images of the bloody puputan reached the West, the general perception of the Netherlands as a benevolent colonial power was tremendously tainted. At the time the Dutch were also copping criticism for their raft of punitive policies in Java and Sumatra. To atone for their sins, the development of tourism and measures to preserve local culture became a priority for the colonial government of the Netherlands East Indies. Write Hitchcock and Putra (2007), “The origins of Bali’s tourism industry can thus be traced back to 1908, a few weeks before the last Balinese kingdom fell, when representatives of commercial banks, railroads, insurance companies and shipping agencies founded in Batavia (now Jakarta) the Association of Tourist Traffic in Netherlands India.”[i]

Never have I lived so close to the sea. Sanur’s coast is an almost constantly calm tidal lagoon protected by coral reef. When the wind is low at sunrise and sunset it glows like a vast mirror, glassy and incandescent. When the wind is high the sharp scent of seaweed sweeps across the waves from neighbouring islands Nusa Lembongan, Nusa Ceningan and Nusa Penida, where it’s farmed and dried in squiggly green sheets on their shores. On coruscating days the limestone cliffs of Nusa Penida, the largest of the three, are luminous. I’m mesmerised by the meteorological magic of a Sanur sunrise or sunset almost daily. 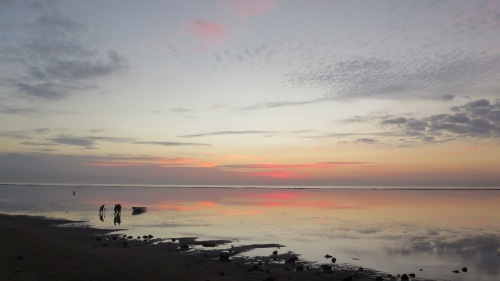 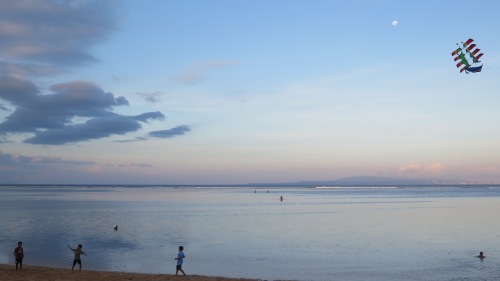 Sanur is one of Bali’s oldest tourism areas, and its gentle charm has been preserved by the local government’s prohibition of structures taller than a coconut tree. There is one anomalous gargantuan eyesore, however: the Inna Grand Bali Beach Hotel, the island’s first high rise, whose ten storeys and 566 rooms heave up from the shore with the dull façade of a hospital. It was built by the government towards the end of the Suharto era in 1966 with Japanese war compensation funds, and while some Indonesians celebrated Bali’s modern development debut – a ‘hotel fit for presidents’ – thousands railed against the radical departure from the traditional village landscape. The no higher than a coconut tree law was, apparently, passed in response. (The Inna Grand is still government owned and operated, and is currently rated #57 of 68 Sanur hotels on TripAdvisor.)

A paved path – the first beachfront walk in Bali – stretches across the sand from Pantai Sanur to Pantai Mertasari seven kilometres south. I worship this path. I doubt there’s another like it in Indonesia. In my experience opportunities to traverse steady terrain for long distances without always being on alert for motorbikes are rare. First the path is fringed with warung and little stalls stacked with the usual seaside paraphernalia – sarongs, sun hats, shells, statues – while women sit on tiny stools on the sand grilling corn cobs on compact racks of coals, flaring the embers with bamboo fans. The jagung bakar is brushed with kecap manis and margarine laced with chili. When you’re fresh out of the water, lips still wet with salt, it is heavenly. Roving lumpia (spring roll) sellers are another indispensable feature (they arrive at sunrise!); lumpia are snipped with scissors into a brown paper cone, smothered in sweet gloopy sauce and served with cabe rawit (potent little green chilies). Enak.

On Sunday afternoons the scene is rapturous with dozens of Balinese families revelling in the weekend’s waning golden light. I relish the ebullience of these raucous afternoons; the rambunctious children splashing in the shallows, the garrulous teenagers snapping selfies, the old men drawing slowly in the sand, the grains as big as hundreds and thousands. On one Sunday stroll, further down the path, I lingered at a ceremony. I heard the gamelan long before I approached, it had drifted down on the breeze.

Half a k south the number of locals decreases as the warung grow into cafes and restaurants interspersed with bungalow resorts. I have dined at one of them, Tandjung Sari, which translates to Cape of Flowers. Its thatched-roof bungalows, the first of which were built 53 years ago, are understated in their elegance and its sumptuous gardens are adorned with antique statues. The exquisitely carved dark teak open-air restaurant will undoubtedly stand for decades more, while its sprawling shade trees garlanded with bamboo globe lanterns is a glorious touch. 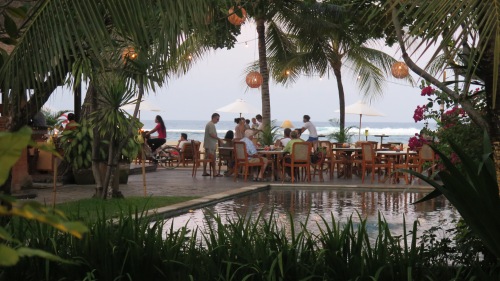 Kroncong band performing by the path in front of Tandjung Sari.

Traditionally the Balinese feared the ocean believing it to be home to dangerous magic, and so they built protective pura (temples) along the coast. The original Sanur settlement was much further inland but fearless fishermen still braved the sinister seas in jukung, small wooden outrigger canoes with a prow like a marlin’s face. They’re still used today and when not out at sea they rest along the path, grinning in cheerful colours like giant children’s toys. 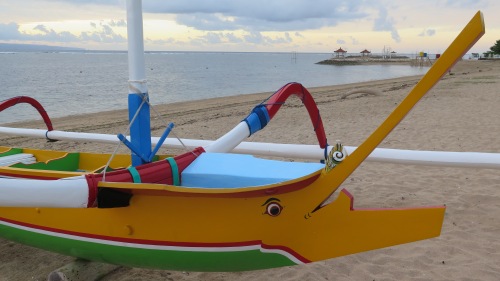 At the path’s southern end at Pantai Mertasari, the bricks become blanketed in sand as the coast extends in reclaimed land, a vast, flat expanse providing perfect kite flying conditions. I can almost always see kites above Denpasar and Sanur, and now it’s the windy season even more adorn the blue. The biggest are the Bebean; formed like open-mouthed fish they’re about four metres wide and ten metres long, their flying line as thick as a little finger. On a recent late afternoon walk I witnessed an impressive landing. Three men hauled in the line like it was rope attached to a hefty anchor while four seized the thrashing fish from the air, two of them stumbling from the force. Perhaps they were preparing for the annual international Bali Kite Festival next month, held just north of Sanur at Padang Galak. Hundreds of teams from around Bali backed by their own gamelan ensemble compete for best landing and longest flight, while international enthusiasts fly modern giants of extraordinary imagination. 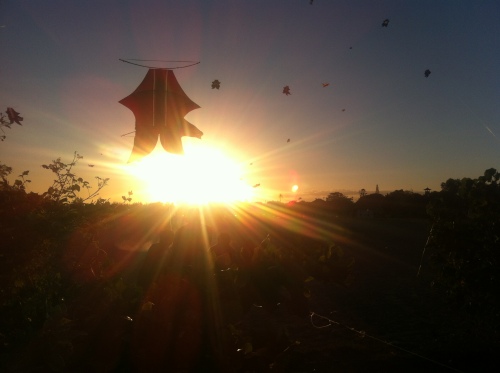 After the ructions over the executions Australian tourism in Bali is finally on the wane, though other factors have certainly contributed; the decline of WA’s mining sector and increasing interest in other tropical destinations such as Hawaii and Thailand. Bali Tourism Office numbers for May reveal a 4% drop compared to May last year, after a lengthy period of sustained monthly growth. I’ve heard locals and regular returners to Sanur remark it is unusually quiet; most cafes along the path are almost empty. Unfortunately I doubt there’s any chance this drop will translate to more Australian tourists venturing elsewhere in Indonesia. It was #BoycottBali, not #BoycottIndonesia, after all.

In March the Sydney Morning Herald ran an exceptional long read by former Indonesia correspondent Michael Bachelard about Australia’s misunderstanding of and apathy towards its neighbour to the north. “We are among the world’s great travellers,” he writes, “but we know pitifully little about the fascinating, vexing, charming, culturally rich archipelago that lies so near. With the exception of Bali […] we fear Indonesia, and fly over it on our way elsewhere.”

This year’s recently released Lowy Institute Poll confirms Australians’ sparse knowledge of Indonesian history and politics. Despite Indonesia being a parliamentary democracy for over 15 years (and an even more democratic country than the UK and US, Elisabeth Pisani postulates) only 34% of Australians agreed it is a democracy (up 1% from last year). Despite the heavily publicised historic election of President Jokowi in July last year, 42% of Australians responded that they do not know who he is. The Poll also employs a thermometer to gauge Australians’ feelings towards particular countries. This year Indonesia is at a fairly frigid 46° (down from 52° last year), which is the equal lowest temperature in the past decade of polling. The warmest temperate was 54°, in 2010 and 2012. Australians’ feelings towards Indonesia this year are about on par with Russia (46°) and Egypt (48°).

As I’m swooning for Sanur every day I can finally wholeheartedly appreciate why Bali’s been one of our favourite travel destinations for decades, but every discovery I make fuels my zeal to travel as widely as possible across the archipelago. During my two months’ island hopping in Sulawesi (before I started my second AVID assignment) I met Greeks, Russians, Finns, Canadians, Norwegians, Brits, Germans, Venezuelans… but only two Australians. This triggers questions about why we travel, but I’ll leave that to Alain de Botton. What I do know is that if Australians did make it off the brutally beaten Bali track the Lowy Poll thermometer wouldn’t be so icy, and the relationship between our countries certainly less strained.